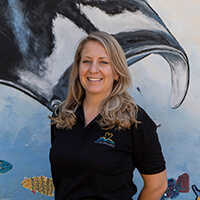 Lindsay, originally from Pennsylvania, USA, has been living in Costa Rica since 2012. She received her Bachelors Degree from Ithaca College in Integrated Marketing Communications and Spanish and her Masters in Public Health from the University of Pittsburgh.

Prior to coming to Costa Rica, she worked for five years at a nonprofit community health center in Pittsburgh as the Programs and Grants Manager. In 2012, she came to Guanacaste to serve as the Director of the education nonprofit Abriendo Mentes. Lindsay partnered with Punta Sabana on several community projects in 2015 and was hired as the Executive Director of Futuro Brillante in August 2016. She lives in Matapalo with her husband and sons.